Behind the Scenes:The Artwork of The Five Dollar Mail 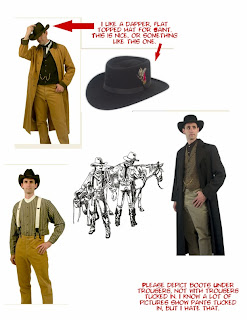 When I get artwork for FDM, most of the time, our artists are not readers and are not familiar with the characters. So I have to send them "character packets" that contain clothing notes, relevant passages from the book, a written description of the character, and a page of headshots from Google Images of people that have a general look of someone I might cast if, say, this were a tv show or movie. So I've included a few examples of the sorts of stuff I send to artists.

I do have sheets for each character, but I don't want to swamp this post with so many pictures it makes it hard to load. So I just snatched some out what was on this particular computer and went with it. 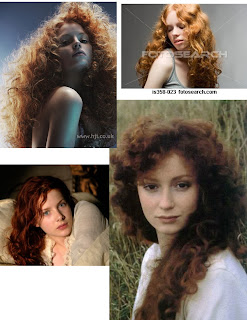 I specifically tell the artists not to make them look like any recognizable actor or model. The photos are to give a general idea of the type of look for each character.

I don't imagine I have to tell you who these redheaded stunners are modeling for. 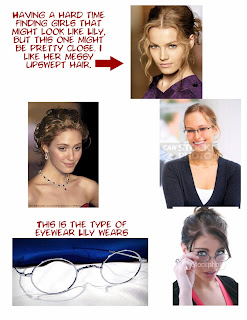 The problem with Lily is that in general, women are not really allowed to be plain-featured on TV. We know a girl on TV or in a move is plain featured because they take some beautiful girl and throw a pair of glasses on her, something that annoys the crap out of me.

Sometimes we have to go with what we can scrape together that might work well enough. It is what it is, I guess. 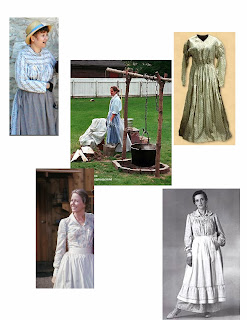 Here's a sheet of women's work clothing that we used for Lily.  I love that we have Ma Ingalls here on this sheet. I suspect that woman in the middle pic is boiling cane sugar down. 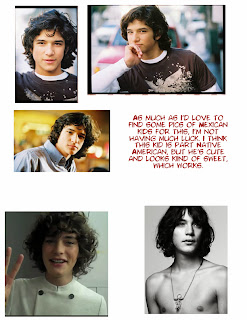 Not really the sort of pics I wanted to use for Luis. Luis is a very specific sort of look and I really was coming up empty handed on it. Underweight Hispanic kid in his early to mid teens. Kind of hard to do a Google search on something like that.

Someone sent me one of these kids as a suggestion and I just went with it. 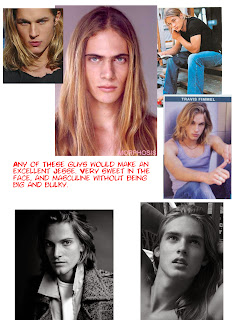 I'm a whole lot happier with these guys. Fortunately, it's not hard to find pictures of pretty young men with blond hair. I'd be fine with any of these guys playing Jesse.


I had a similar problem with Wash as I did with Lily. All the guys I could find that might make an okay Wash were actually far too good looking. He's not unattractive, but it's certainly not the first thing someone would notice about him. His is the type of attraction that has to grow on a person a bit. 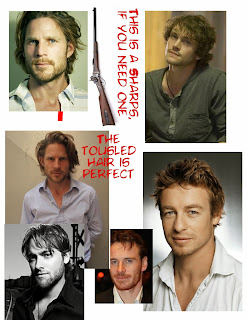 Anyways, I was looking for someone with a strong, open face, tousled hair, and a bit of a weathered look. Again, it is what it is. I thought all the artists that took a crack at him did a great job, despite my non-committal descriptions of him.


I think part of my problem is that I see these people so clearly in my head they are as familiar to me as my own face. All the artwork that's come back is different from that and from each other, and I love that. I love seeing different interpretations. But when I'm looking at actors or models to express my own interpretation, I have a hard time.

Some of these have actually been updated and are no longer in use. Without looking into the laptop, I don't know off the top of my head. But all of these have been in use at one point or another.

I do have more of these things. If you enjoyed this, let me know and I round up the others and throw them out there for you.

After seeing your character sheet for Jesse, I can't get "MmmBop" out of my head...His last name isn't helping any with that problem either.

Would any of the boys mind lending me a handgun so that I can cure this insufferable malady?

:-D That's hilarious! I hadn't thought of that!

Great. Now you've gotten it into my ear as well.

One of those guys is Travis Fimmel, the underwear model that was causing a traffic hazard in New York when they put him on a billboard in his skivvies.

The other guys are some models I managed to dig up. I don't know their names.

Hmmm...probably should have thought better of that. A few of the characters have names that they share with people I know. Jesse's last name is the name of a family of artists I've known for years. I wanted a simple name that sounded like it could be vaguely Nordic...and because I know people named "Hanson", that's what I came up with. But now, what has been seen cannot be unseen.

I would love to create some fan art for this story and I was wondering if you would be able to send me some of the character packets?
I would just look things up myself, but then I would be at risk of physical inaccuracies....
If it's not too much that is... :)

Yes! How awesome! I'll be in front of my computer a bit later and send it to you. Anyone in particular?

My main priorities are Fiona, Lights The Storm, Saint and Lily.... But I certainly wouldn't object to any of the others! :D

Okay, I'm sitting in front of my computer now.

First off, I have to tell you that fan art and fan fic are pretty much my favorite things.:-)So you rock!

Since you're a reader, you probably need a whole lot less guidance than artists not familiar with the story. But since you asked, I updated the relevant pinterest boards and started a little link widget way down there on the bottom of the page with references/links I send to artists. I probably should have started doing this eons ago, so thanks for putting a bug in my ear. Having all that stuff in one handy place is kind of a no-brainer, and I don't know why I didn't do it long ago. (whole lot easier than rounding up text files, picture attachments, etc.)

If you like, you can contact me directly at paintedwheel AT hotmail.com. Just put "FDM" or something in the subject line that will let me spot it so I can put you on my safe list.

Again, you rock! Thanks for your support!

Thank you so much! :D
I'll be sure to reference the Pinterest boards and study the links thoroughly.....
and I'll happily show you when I've finished a couple if you want.

Again thanks for the help :)

P.S: just a quick question. Storm gives Fiona his feather at some point and I would like to draw her wearing it to show her connection to Storm.... Would that be alright?

You can certainly feel free to portray the characters any way you see fit. I like to see a reader's interpretation. I am not a stickler at all about any of this stuff.

Having said that, going by what's actually in the story at this point, Fiona's not wearing the feather openly because it would be suspicious. If you all want to know where that feather is, it's in her bodice, close to her heart, and hidden. ;-)

But that doesn't help illustrate it, really, so you may do with that info what you wish.

Oh, and yes! Of course I want to see! I can hardly wait!