Saint sat silently in the jailhouse tossing a ball at the wall and letting it bounce back at him. He had several long cuts across his face as well as a deep bruise across his jaw; his hands seemed to be bruising across the knuckles as well. He glared at a large man sleeping in the cell next to him and listened to Blackie snoring. Sighing he sat back against the side of lower bunk tossing the ball against the wall and then catching it. It was dull that was for sure, the door opened and the sleeping Blackie stirred as the moon shone into the room. Wash walked in as Blackie woke and smirked at Saint. “Hear ya were here, whatd’ya do this time lad?”

“You wouldn’t believe it,” came another voice from the top bunk. Luis jumped down from the upper bunk. “It was a sight to be seen!” he smiled.

“I was, I got back in time to help Saint out! It was…” Luis started.

“None of your damn business,” Saint snapped at the boy. “Nothing happened, just got pissed off at that bastard over there,” Saint sighed indicating to the sleeping man.

“Yeah, right,” Luis smirked. “You should have been there Wash, tables went flying, girls screaming and Saint, pulled out a knife!” Luis exclaimed. “Look at the man’s face!” the man on the bed had a long bloody cut running down his face.

“I don’t know!” Luis answered. “I came in late, but man it must have been going on for hours before Blackie showed up, he had to use his gun to break it up! More then once!” Luis added.

“He was right Saint, I did have to use my gun several times, I wasted a good ten rounds to get you two to stop,” Blackie sighed. But this time the large man in the bunk next to him stirred and woke. “What started the fight anyways?”

“I’ll tell you,” grunted the man in the other cell. “That damn man spilled his bloody beer on me,” he spat in an English accent.

“Well,” Saint sneered. “I did say sorry didn’t I, it was an… accident,” Saint answered.

“Bloody damn right it wasn’t, you didn’t even mean it,” he spat back getting up and walking to the bars of the cell.

“Well, if you hadn’t been talking about the girls the way you were…” Saint added.

“Whoa lad, calm down, what did the man say about the girls?” Wash asked.

“He said that England, and Little Miss were worthless,” Saint responded.

“He didn’t!” Luis growled looking at the man. “I am now damn pleased I gave him that black eye…” he muttered.

“What?” Wash almost yelled. “When in hell did you meet the girls?”

“Just yesterday, I was on a run and I say the way that English girl looked at that Indian, no respectable English women would ever put herself in that place. She should be home and taking care of the family,” the man growled. “Not looking at a savage, or even caring for one.”

“All the more reason to make sure he doesn’t reproduce, the filthy French, I wouldn’t put it past them to mix with those savages,” he growled. Saint looked at Wash who looked ready to kill the arrogant man in front of them. Blackie too almost looked willing to sentence him to a hanging.

“And what about Lilly?” Luis growled.

“Hardly call that a women,” the man growled back.

“That’s it!” Saint yelled. “You know nothing of the girls!” suddenly a figure briskly over and slammed something over the Englishman’s head with such force he fell to the ground. The four men stood stunned.

“Well, I would hardly call that an Englishman,” Fiona hissed holding a dented pot of coffee. “I had quite enough of him,” Fiona answered. The pot seemed to be leaking coffee as she held it. “Oh, sorry! I have to get some more coffee, I’ll be back boys, Lilly come on,” Fiona led Lilly out of the jailhouse. “I’ll make sure to add some vanilla,” she added before she closed the door behind her.

“Damn,” Saint laughed as he sat back down against the bunk and started to toss the ball again. “How long had she been there?”

“Well, if that isn't a woman, then I have no damn clue what is,” Saint snickered. 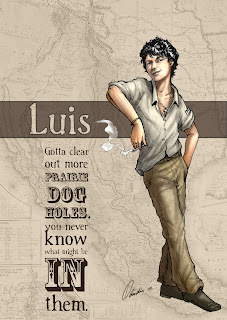 Trying to catch up a bit on the artwork, I feel like I'm way far behind on it. So, for Thanksgiving, here is a great picture of Luis Santana, who would have the distinction of being the most infuriating guy on the crew if it weren't for Saint.

Diego did a great job on him, as always. I love the smokes rolled up in his sleeve. Thanks again, Diego!

I'm going to go ahead and put this up tonight, as I'm probably not going to have internet connection for a couple days and this is at least ready to go now. Just in case I don't get back online for the rest of the week. Which may happen.

Anyways, however you spend it, have a great Thanksgiving, everyone!
Posted by 'gina at 9:33 PM 9 comments: Links to this post 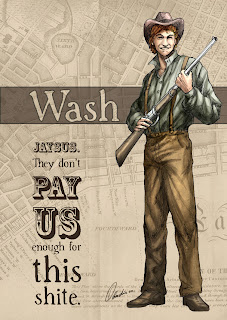 Here is a fun picture of our favorite stagecoach gunner, George Washington Monahan. As always, Diego has done an amazing job of capturing the personality of the character. He has done the color as well.

The graphic is by me. I lucked out on the background map.

Thanks again for an awesome job, Diego!
Posted by 'gina at 3:27 PM 4 comments: Links to this post