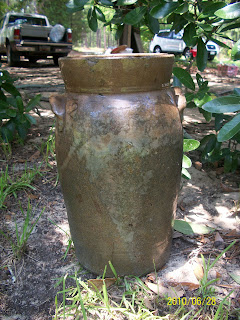 This is a stoneware butter churn jar. My parents used to keep it on the the fireplace hearth and use it to store fatwood. I have never seen the lid to it, nor the dasher (the part used to churn butter), most likely because they were probably made of wood and eventually rotted away. The lid would have been a circular disc with a hole in it, and the dasher would have been a stick like a broom handle with an "x" shaped crosspiece attached to the business end.

I ain't gonna say how old I am, but suffice it to say that the birthday cake presented to me yesterday did not have any candles on it due to fire code regulations. Lets just say I was a toddler a long ass time ago and leave it at that.

Anyways, see that "2" stamped on there? I am guessing that means it holds two gallons. 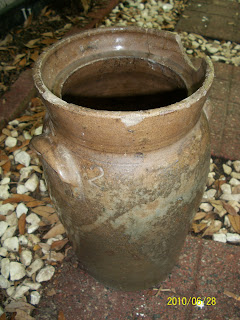 I noticed  that this churn has a perfectly round hollow in the bottom of it. I cleaned it up and looked at it closely and realized that the hollow had no glaze in it, while the rest of the churn did.  (it is shiny in the picture down below because it got wet when I washed it out and there is water in the hole) I am thinking that hollow was worn down by whatever was holding the crosspiece on the dasher. It does not look like it was part of the deliberate design of the jar, so I am thinking it was worn there by years of use.
The way this thing worked was you simply dumped some cold cream in there, dropped in the dasher, fitted the lid, and then sat down for a long session of whipping the dasher around in the cream. That's it. You just froth the cream around and it will turn into whipped cream, getting harder and harder to churn. The whipped cream will get stiffer and stiffer and then all of a sudden it will start liquefying again and start sloshing around as the milkfat starts separating from the whey. Keep going and what you will have is clots of butter sticking to the crock and the dasher and floating in the remaining buttermilk. 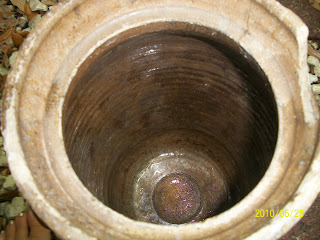 There is no mystery here. You can do this, as I do, in the kitchen with a bread machine (should have a butter function or simply a knead function. Either should work.). You can use a mixer (I tried using a blender once, results not awesome with that.). My dad used to make butter using an old mason jar. Just put the cream in and shake till it throws the milkfat.
Then you pour strain out the buttermilk and rinse the butter in cold water. Rinse well, as the remaining buttermilk can make it go rancid more quickly. Blot dry and maybe mix it up with a little salt, if you like salted butter.

You can then press the butter into a mold (I even have a pretty stamp to put on mine) or just scoop it into a bowl.
Posted by 'gina at 1:00 AM

Heh-- I swear, I _will_ review all other chapters! But, in the meantime... in some states, there's the 'learn about state history' year-- I was in fourth grade. Seeing as it was also out West, all of us fourth graders wandered out to where a Conestoga wagon was parked with some re-en actors and we got to pretend we were from the Oregon Trail Days-- which was pretty gosh darn boring! Among other activities, we made butter, in little baby food jars. I don't even remember what it tastes like... :( It's so cool that you have such a solid butter churn! How much does that beast weigh? ... And what's fatwood? Sounds like bitterbrush or sagebrush type stuff... It also sounds smoky as all get out, so why did your parents use it?

So nice to not have to wait for hours to comment again. ^w^ Looks like it'd hurt if you dropped it on your foot.

Well, you would think the churn weighs quite a bit, but really it does not weigh much. It has some heft, but it't not terribly thick walled, so not too bad. Remember, it is only a two gallon size.o

I would LOVE to have seen the re enactors with the Conestoga wagon!

I grew up in the Sandhills/Fall Line area of South Carolina and lived in a pine forest. I don't know if this is a southern thing, but when pine trees around here die, they rot down pretty quickly, all except for the hard "skeleton" inside and the hard shards of resin filled wood down below the ground level. The skeleton falls over leaving a deep, corkscrewing hole in the ground. Inside that hole are shards of of aromatic, reddish, resin-filled chunks of wood that look like bacon and burn like they are soaked in gasoline. This stuff makes excellent kindling. You can start a fire with a pile of wet kindling if you throw some fatwood under there first.

It burns hot and fast, so it doesn't smoke much.

We used our fireplace a lot. South Carolina was not (and still isn't) set up to handle a lot of ice, even though we do get ice storms down here sometimes. No snow plows and vulnerable power service means you might be trapped in your house with no heat. So, it's good to have a fireplace and the means to keep a fire going for an extended period of time.

So there is the long, boring explanation of what fatwood is.

You're about the same age as me so don't be talkin' trash about us old folks!!! ;-P