"This is the story of a sad flute, a laughing baby, a weeping sword. A long, long time ago, in a land far, far away, there lived a warrior. A warrior with empty eyes."

Now, something I’ve learned in my life is this: Pam Slice knows what I like. So when she tells me to read a book or to watch something, it nearly always behooves me to do it. 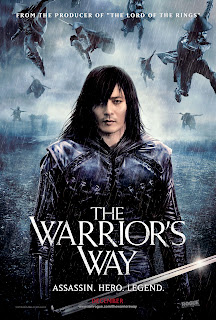 Pam was wrong. No, not about me liking it, she got that part correct. She was wrong about me having to wait about ten minutes to like it. I liked it within about twenty seconds, if it even took that long. She knows how dearly I love westerns (particularly ones that bring something new and unusual to the table). But I think she forgot two other things I really like. One is comic books. The other is Kung Fu movies.

So if you saw this movie poster, you probably wouldn’t think it was for a western, would you?

It is. Like Pam says, give it a few minutes. Here’s another version of the poster. Yes, those are ninjas in the background. 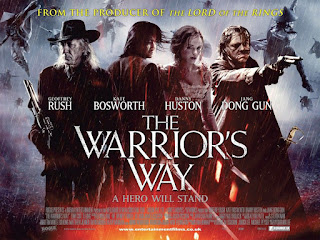 The story begins in 19th century Asia. The protagonist, Yang (played deliciously by Dong-gun Jang) is an assassin who refuses to kill the last member of a rival gang, who happens to be a baby. This defection marks him for death, and he flees to America, searching for his old friend Smiley, who he believes is living in Lode, a broken down Old West town. There he meets an assortment of interesting townsfolk, including Lynne (Kate Bosworth), an intense, adventurous young woman who worked with Smiley in the local laundry, Ron (Geoffrey Rush), a gunslinger-turned-town-drunk, and Eight Ball (Tony Cox), the leader of the carnies from the now-defunct carnival that once dominated the town.

Yang and the now-orphaned baby girl have come to Lode to escape their enemies, but Lode has dangerous enemies all its own. Yang must now choose between the peace he desperately craves and defending the town he’s grown to love.

The movie is a treat for the eyes. It very much has the feel of a beautifully rendered graphic novel. I felt as if I were watching artwork come to life frame by frame, and given that I suspect a huge amount of the scenery for this movie was done in CGI, I suppose I was. It has a dreamy, surreal, almost fantasy flavor to it. There is something about the giant derelict Ferris wheel rusting amidst the scouring, shifting desert around it that evokes something wistful and half-remembered deep in my subconscious. It, and the entire crumbling town seem like some weird American Ozymandias slowly being swallowed by sand and apathy and forgotten, taking their occupants with them.

I absolutely love the cast in this movie. I love that it doesn’t have the usual standard cast of characters you find in most westerns. I love the fact that the female lead spends most of the movie wearing men’s clothing and always has dirt on her face. I love that she is strong and capable and takes charge.  I love that she’s playing opposite an Asian actor (Dong-gun Jang is actually South Korean, but still.), because that’s not something you see very often. Thinking about it, you don’t see it pretty much ever. I’d go into more detail here, because I have quite a bit to say on this particular point, but I don’t want to include any spoilers if you decide to watch it (which I strongly recommend you do). I love that the movie’s cast is filled out with quirky carnival folk. And, of course, I love Geoffrey Rush. Is he ever in anything where he’s not great? And I love the fact that it contains one of those toe-curling love scenes that comes and goes in an instant and consists of a glance, a kiss, or a breathless quip about something else entirely (my favorite one of all time being the line in the movie The Last of the Mohicans where Hawkeye says "I'm looking at you, miss.").

And I think the number one thing I like about this flick is the fact that it is, above all else, a character movie. I’m one of those people who cannot get into a movie unless it is character driven. I don’t care about cast, special effects, or action. I don’t care about genre, although naturally I’m going to gravitate towards Westerns. I care about characters. That this movie is that in addition to being visually stunning makes a must-see.

If you give it a go, come back here and let me know what you thought of it.


BOOK UPDATE: I had hoped to have the book available for purchase this week, but there were a few technical problems and we just decided that rather than rush it and have all this stress and make hasty mistakes, we were just going to take our deadline off. In all honesty, it’s This Close. THIS CLOSE! And the little nit-picky crap we’re having to address is driving me nuts! Every time I think we’re done...we’re not. I just spent all morning having to tinker with a page spread issue in the first couple pages of the print version. I actually ended up going “screw it” and expanding Chapter 1 to make the left to right page spreads work better. So in addition to having a nice clean copy and extra artwork, the purchased versions (both print and electronic) will have little bit of extra material in what is now the Prologue (you all know this chapter as the poker game) and in Chapter 1.

I had NO IDEA of the maddening little details involved. This has been a learning experience, that’s for sure. Hopefully, we will learn enough doing Book 1 that Book 2 will be easier. I am hoping I won’t have to tear my hair out anymore.( I’ve already torn it all out, but you know...) It’s not as simple as just uploading stuff.

So, two weeks, tops. Keep your fingers crossed. You all will be the first to know.

I’m going to be gone and unavailable next week, so it’s unlikely I’ll be posting anything new until the week after. I will, however, be answering emails and other correspondence.


PS: I wasn't going to include the movie trailer, because frankly I think it includes too many spoilers if you want to see the movie for yourself. But I just noticed it was still tacked to the end of the post (I had it here while I was working on the post as a sort of "quick review" for my own use.). If you want to have a look, knock yourself out:

When that movie was about to come out in theaters, the trailer was running at Gamestop where I work on our TV every 5 min. I thought it looked cool, but as it is with *almost* every movie that they advertise at work, it makes me want to wait years before I go and see it. (current exception is that they're showing trailers for the new Star Trek movie... no way in HELL am I not seeing that opening weekend!)

I might have to see if it's on Netflix or Hulu or something, cause it's probably over the top fun action right up my alley! :-) Glad to see a good review on it, because as with a lot of trailers, it was one of those that looked like it could be a lot of fun, or really bad... glad to know it's a fun one!

Glad to hear update on the book!

It was on Netflix for a while, I think. You could look and see if it's still on there.

I guess everyone's got their own tastes, but as for me, I thought it was a fun movie. I loved it. In fact, I raved about it to the husband and then watching it again with him when he watched it.

You don't have to stop babbling here. I've been babbling for years on this very site. ;-) I always look forward to your comments!

If you like Korean westerns, you must watch "The Good, The Bad, and The Weird"

Hey, you know I am all about westerns done in unusual ways, so I'd be all about one set in the alps. And because I love the movie featured here so much, I'd also be all about watching a Korean one. Looks like I have a little movie watching in my future. ;-) Thanks!