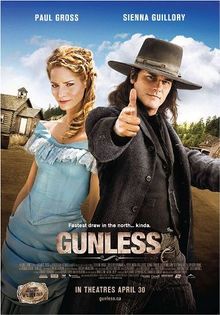 So after I watched The Warrior’s Way, Netflix streaming throws a couple other Western type flicks my way like it does when you give a movie you like a high rating. One of them was the movie Gunless, a Canadian flick I’d never heard of. This is the description from the Netflix site:

Fleeing the law, infamous bandit Montana Kid (Paul Gross) heads north to hide out in Barclay's Brush, Canada (population 17), where nobody seems to understand the code of the Old West. For starters, the gunfighter is amazed to find that nobody even owns a pistol. The Kid slowly warms to the town, and especially to the sassy and outspoken Jane (Sienna Guillory), but is forced to strap on his six-gun when the posse comes looking for him.

I shrugged and went, “Well, it’s not like it costs me anything if I end up not liking it and turning it off. Whatever. I still have clothes to iron.”

See, that’s when I get the bulk of my movie watching done. When I’m ironing clothes. Betcha didn’t know I was all that domestic, eh?

Anyhoo, I thought I’d give it a try. The opening scene features Paul Gross, sat backwards on a horse, his hands bound, a noose around his neck, a limb dragging behind, and covered (and I do mean covered) in pigshit. Dramatic, spaghetti-type western music plays over the open.  I’m here to tell you a movie starts out like that, you know that no matter what happens next, it’s probably going to be a lot of fun.

The town the Montana Kid’s horse has taken him to happens to be over the Canadian border. It’s a tiny little town with a handful of quirky, colorful folk living there, none of whom own any sort of firearm. The Montana Kid is a quick tempered gunslinger and a notorious outlaw, and demands to be taken seriously.

I won’t spoil it for you. Suffice it to say he isn’t.

The humor in this movie is quiet and quick, and in typical Canadian fashion, charmingly self-deprecating. There’s a scene where what starts out as a serious conversation devolves into a bunch of people bickering about semantics. What I so love about that is that that really happens in real conversations. It’s stupid and annoying and oh-so-very true to life. And the Montana Kid, having lost control of a situation in which he (once again) attempts to play the part of the scary badass gunslinger, ends up being completely unable to assume the role he’s used to because he’s basically being ignored by a roomful of bickering nerds.

It’s sort of like watching The Man With No Name sitting on the can reading a newspaper, if that makes any sense at all.

So, having said that, I don’t want to give the impression the movie’s all comedy. It’s not. The characters are very well thought out. Their motives are realistic and their emotions are very real, very human, and in some cases, downright heartbreaking. The characters (and this is very important to me) grow and change and evolve. They bounce off each other with such a familial ease that you absolutely believe this little town existed long before the Montana Kid’s horse carried him here. One of the things I liked best about it was the this: you know how there's always that trope where someone is "wanted for a crime he didn't commit?" Well, Montana Kid makes his first appearance as someone who narrowly escaped a botched hanging and there is a very good reason someone tried to hang him. And that reason is that he's actually guilty of being a dangerous criminal. He doesn't even try to deny it. The gaggle of not-too-bright local screw-ups think having an outlaw in town is cool and exciting, and mention how many men he's said to have killed. He corrects their count...they've stated too few. The best thing about that scene? The fact that he wasn't bragging when he said it. It was more of a confession, although he's not seeking repentance. And the look on his face when he says it speaks far more than the words coming out of his mouth. The Montana Kid might be in a humorous situation, but he's a far bit worse than a lovable scallywag. He's an unrepentant killer, and I applaud the movie for having the guts to portray him as such in a movie with so much humor in it.

Paul Gross is brilliant in the lead role. It’s a bold choice for a film to have its main character and leading man spend the first twenty five minutes of the movie covered in shit and offending the other characters with his stench. And also with his big mouth; he's frankly an ass. That's kind of risky, isn't it? I mean, who does that? Most of the time, movies go out of the way to convince you to root for the main character. But then, this movie is not like other movies. The way this movie tells the story is a bit different than your normal formula, and the characters are unusual and quirky. I really love that.  If you’re reading this blog, I’m going to guess you do, too.

Graham Greene is also awesome as the deadpan native scout quietly humoring the uptight and harried Canadian Mountie with whom he travels. Who is also awesome in his own right. Hell, the entire cast does a great job.

So after I watched it, the very first thing I did (after giving it five stars) was to call up Pam Slice and say, “Okay. I got one for you now.”

Just watch it. Let me know what you thought of it.

Hmmmmmmm... On Netflix you say? I might have to check it out!! (and actually decide to watch a movie *before* it's bedtime and want to go to sleep)!

And on a slightly different note, just got done with reading my hardcopy of The Green. :D It was WONDERFUL to re-read, and since it's been so long since I've read some of that early material, almost seemed like reading it anew! "Perfect" place to end it btw... Perfectly infuriating like all good first books should be to make you want to go out and get the next one!! lol ;)

Can't wait till the next one is ready!! I know I've forgotten parts, and I love having it in my hands to read!! The format and the book itself are beautiful, and I was very pleasantly surprised to see it as a trade paperback, and not mass market! (I prefer trade paperbacks over mass market due to the larger size--easier to *not* break the spine on them!)

Keep up the wonderful work!!! :D

One of my all time favourite movies! It was shot not far from where I live, so it was kinda fun to look at the landscape and the mountain skyline and go "I know EXACTLY where that is!".

I worked at a video store when it first came out and it was somewhat disappointingly unpopular, and got reviews that made me suspect the people who wrote them just skimmed the movie, rather than actually watching it. I'm so glad someone out there enjoyed it as much as I did!

Katrie: Thanks so much for that shining review! Glad you enjoyed it. Yeah, I was really happy with the quality of the thing, too. It's a really nice, solid trade paperback with some heft to it and the art came out really well.

Next one is coming along. I think we're all a lot better at this on this time around. I know I am.

MaryAnne: How cool is that? I live in South Carolina, and there have been a few movies filmed here in the south. (notably Forest Gump, The Patriot, and Last of the Mohicans.) It's really cool when you recognize places from movies like that.

I haven't read any other reviews on Gunless and now I'm curious. I have to wonder if some people don't prefer their comedy mixed up with sober themes. Or (as in the case of Cowboys and Aliens) think they're getting some sort of slapstick, silly movie and then are disoriented by the fact that the movie's not just mindless, silly fun.

Sometimes it's hard to get into a movie if you have totally different expectations of it from the beginning. I don't know.

Harri and I watched it this weekend and we enjoyed it! The humor is low-key, very Canadian so I can see how people who were expecting slapstick could be disappointed. Personally I *like* my humor a bit low-key so I loved it!