Halloween Special: Where Are You? (Part Two) 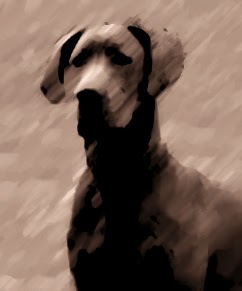 The last of the blue-purple twilight threw the room into shadow. Lily could smell dust and old paper and the acrid damp of old fireplace ash as she gripped Saint’s arm. At least this place is well built and holding up. The roof seems like it will keep out the rain, at least. Their footfalls echoed in the stillness, making Lily cringe, filling her with the sensation that she was intruding and disturbing the tomb-like stillness of the long uninhabited house.


Coming up behind, Jesse was clearly not suffering from the same self-consciousness. His boots and the dog’s claws clattered loudly across the bare wooden planks beneath their feet. The dog was panting, happy to be inside, his gaping mouth wide in a loose, tongue-lolling grin. Saint glared over his shoulder. “Shhh!”


Saint paused, catching himself. “I dunno.” He put a callused hand protectively over Lily’s, trapping it against his arm and giving it a firm caress as if sticking it there with imaginary glue. “I don’t know why I said that,” he sighed, speaking softly, but normally. “I guess we should check to make sure nobody else is in here.”


Lily felt her skin prickle, and she gave gripped his bicep a little tighter. “I hadn’t thought about that, Saint.” She glanced warily around the shadowy room. “The door was locked. I didn’t see any windows that looked like anyone had forced their way in.”


“He’s right.” Jesse said. “I ain’t staying in this spooky old place without makin’ sure we don’t get surprised.”


“Well.” Fiona crossed her arms and looked around, crinkling her nose. “there are other ways in here...but the air is so stale, I rather doubt anyone’s been in here.”


Jesse turned and closed the door behind him, deepening the gloom inside further. He gasped, snatching his hand away from the doorframe.


“What?” Lily instinctively stopped and turned toward her brother. “What’s wrong?”


“Splinters.” He frowned, sucking his index finger. “I woulda thought a house like this wouldn’t have...look at this door frame!”


Jesse had slid his hand along the doorframe when he’d closed the door, and had found out the hard way that its once-polished and varnished surface was now chipped and chewed into a riot of splintered ruin. While it might have been barely visible on the outside of the house, the damage was in plain view from the inside. From the doorknob down, something had scoured the doorframe and door, and in some places had actually ripped the carved wood free. A deep, gaping crack showed where the deadbolt had broken through the wood at one time.


Lily let go of Saint’s arm and hurried to inspect Jesse’s hand. “We’ll have to get some lamps lit and see if you have any slivers stuck in your skin. What on earth could have done all that damage to the door?”
“I dunno...” Saint’s hand strayed to the Colt strapped to his hip as he squinted in the dim, fading light. “And it don’t make me feel any better that whatever it was wasn’t tryin’ to get in.”


“Whatever it was, it was big.” Jesse’s eyes darted around nervously. “Now I really want to make sure we’re alone here.” The dog darted into the room, tongue still lolling in his mouth as he sniffed and panted, dislodging cobwebs as he want. “Bet you’re glad he’s here now, ain’tcha Saint? Nobody sneaks up on a dog. What do you smell, boy?” He stepped quickly beside his new friend, ruffling the hair between the dog's shoulders. The dog’s tail slapped against his legs.

Outside, the sound of raindrops spattering against the tin roof of the porch started, pinging across the tin in sporadic clicks and thumps before settling into a loud, hissing rhythm. The smell of earth and ozone filled the air, teasing Lily’s nostrils as it mixed with the smell of dust and age. She shivered, drawing her shawl tightly around her shoulders and slipping her hand back into the comforting warmth of Saint’s arm.
Posted by 'gina at 6:59 AM