Halloween Special: Where Are You? (Part One)

Missed you all, and glad to be back. The Halloween Special is going to be a little different this year. I'm going to publish it in a couple parts, and will probably be on an accelerated posting schedule for a short time. So when you come here and there's something new, make sure you haven't missed anything. I'm still kind of playing it by ear, and while I know I'll be posting, I don't know exactly what nights yet. 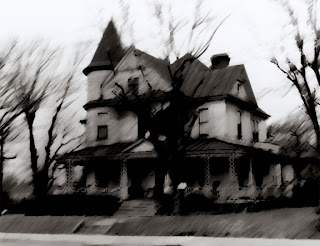 “You sure that thing ain’t a horse, Farm Boy?” Saint watched Jesse feed the enormous dog another piece of jerky, watched the huge jowls flap with enthusiasm as the dried buffalo disappeared into the animal’s salivating mouth. “What the hell kinda dog is that, anyways?”


The dog had appeared out of the yellow and brown overgrowth of dead grasses and brambles sprawling across and choking the once-neat yard surrounding the rambling hulk of the house. It was a huge, gangly brown animal with a clumsy, loping gait, and he’d bounded over to Jesse like a he was seeing a long-lost friend. When Jesse had seen the ribs showing in deep relief beneath the dog’s short, rough pelt, his face had twisted into a frown of concern and he’d reached for the food basket. “A great, big, brown one,” he had said, immediately offering it their lunch.


“So...” Saint watched the dog gulp down a biscuit. “You know that’s got to last the four of us till tomorrow?”


“We ain’t starving, Saint. Look at him. I know what it’s like to be that hungry.”


Saint nodded, a surge of affection softening his mood. “You’re right, Farm Boy. It’s alright.” Saint hadn’t much liked the fact that his supper was gone, but the dog clearly needed it more than any of them did. He figured that now it would most certainly be following them home. And that’s if Jesse doesn’t outright put it inside the coach. He shook his head, thinking about dog hair, slobber and dirt ground into the leather seats of the Concord coach, and how the Old Man would probably make him clean the mess. Sighing heavily, he resisted the urge to roll a smoke. “We should have taken the mud coach.”


“I think not.” Fiona admonished him, pulling her green wrap around her shoulders as she stepped between the rusted and leaning wrought iron gateposts and took a few steps up the crumbling front walk. The house beyond was extravagant, with wide porches and round turrets. It had once been a masterpiece of architecture. Now it was worn and weathered, with broken windows and ruined woodwork crumbling from its once-beautiful face. “We’re bringing back Doc Plunkett’s late aunt’s fine china and crystal,” she said. “I wouldn’t dream of attempting to transport something like that in anything but a coach with thoroughbraces, would I? I’d like it all to be intact by the time we make it home.”


Probably a good thought...Saint had to concede. The bumps and jolts of the road would not damage their cargo in a Concord. But they hadn’t counted on a wobbly wheel hub and the muddy road. It had slowed them considerably, and now it would be dark soon. We most likely ain’t getting out of here till first light tomorrow. At least it’s a nice house and Jesse’s along. The last thing I wanna do is get asked any questions about spending the night away with Lily.


The dog was standing up on its hind legs, now, his tail wagging and his bony elbows resting on Jesse’s shoulders. Merda, that’s the biggest dog I’ve ever seen...thank God he’s friendly, or he’d have eaten us already. He turned his gaze to the house, darkened in the deepening light, and watched Fiona make her way up the walk, the mauves of her dress and deep reds of her hair echoing the sunset light.  Lily walked past him, carrying the other food basket, and he turned to take it from her.  “You sure there ain’t nobody living here, Little Miss?”


She let him take the basket and threaded her hand through the crook of his arm, letting him lead her up the walk after Fiona. “Yes. Doc Plunkett’s aunt passed several years ago, and there’s some things in the house none of their children wanted. Mrs. Plunkett said we can have our pick of it if we bring her what’s left. She’s already gotten out what she intends to keep herself.”


“How do you know there’s anything left at all? People must’ve been by here since then.” He looked down at her and met her clear gray gaze, smiling up at him from behind her silver spectacles. “Don’t you think thieves...?”


Jesse was dusting himself off and falling into step behind them. “Would you come here if you didn’t have to? Look at this place!”


Saint gave a shrug of agreement. “That dog sounds like a bear breathing. You aren’t bringing him inside, are you?”


“Well, he doesn’t want to stay out here. And nobody lives here, so nobody’s gonna care.  Besides, it’s going to rain again.”


“My word.” Lily breathed, awe evident in her voice. “This is the finest house I think I’ve ever seen.”


Fiona was jiggling the key in the lock. “I imagine it was at one time,” she said. “Such a shame that it’s fallen into disrepair. The weather out here is brutal on a house”


Saint glanced at the sky as it rumbled above them before stepping up onto the expansive, covered porch. Rosy light flickered inside the purple clouds, rumbling ominously inside their great, heavy depths. “There’s worse places to spend the night,” he said as he hurried his step. “Let’s get inside and see what we got to work with.”

I'm getting Scooby vibes from the dog being present. :P
This is building up to something!

I love these Halloween posts!

Title seems to suggest that your intuition is likely correct. And now that damned theme song is stuck in my head.

I'm not saying you're right or not, I'm just getting a chuckle out of all this. ;-)