Halloween Special: Where Are You? Part Three 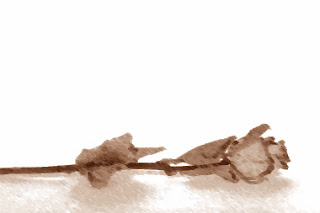 Jesse didn’t know why he felt so skittish. Logically, there was no real reason to be spooked and he knew it. He’d been in downright scary situations, so the idea that being in a darkened house would be giving him this much gooseflesh embarrassed and annoyed him.

Beside him, the dog bumped against this legs, whacking him periodically with its ever-wagging tail. The animal’s enthusiasm went a long way towards calming his nerves. If something were amiss, the dog would surely know it before he did.

The steps creaked beneath his boots, echoing in the long-empty space. He held the lamp out at his side, so the waving flame within would not blind him. It threw long, flickering shadows across the dusty floor.

There was no way he was going to go back downstairs and admit to Saint and the women that his nerves were beginning to get the best of him. He braced himself and tried not to think about the ruined doorframe downstairs, the cracked place in the wood where the deadbolt had broken through on the inside. What the hell did that? What the hell could have forced that door open from the inside? What wanted to get out that bad? He shivered, and calmed himself by reaching down and scratching the dog’s roughly-furred head. Other than Doctor Klugh and his family, I mean. He felt ice creeping up his spine, felt the hair on his arms stand up. Why the hell would anyone own a house like this and not want to live in it?

He realized with a start that his hand was sweating around the grip of the pistol strapped to his hip and he forced his hand to relax. “Shitfire,” he whispered.

His companion whined, the pace of his tail picking up speed and enthusiasm. The dog stopped at a closed door in the hallway, breathing hard and panting as he pawed at it. The door frame was covered with deep gouges.

Jesse felt the bottom drop out of his stomach and he fought every urge he had to go back downstairs and get Saint. I go get Saint, there ain’t gonna be an end to the torment. He ain’t never gonna let me live this one down, I do that. His fear made him giddy, euphoric. He took a deep breath and slid the pistol out of its holster. Wrapping his fingers around the ornate iron knob, he slowly turned it. He felt the heavy bolt slide back into the iron mechanism, and all that was left for him to do was push the door open.

He froze, hesitating. The dog was whining loudly, scratching at the wood. He had to grip the doorknob hard to keep the door from being pushed open before he was ready. A bead of sweat rolled down his spine under his shirt, icy and tickling and making his skin crawl. The dog’s floppy brown ears were forward, flapping wildly against its face. He drew the pistol up, reasoning with himself that they were on the second floor, that the dust on the floor hadn’t been disturbed in years. You’re an idiot, Jesse Hanson. That tore-up woodwork is the work of some dog that used to live here. Maybe even this one. The dog was signalling that he wanted to play, not that there was danger and that he wanted to fight.There’s squirrels in there. Or racoons or rats. Find your balls, Farm Boy...

He pushed open the door and shone the light into the shadows beyond, hearing the faint whispers of snapping spiderwebs and disturbed dust. The dog gave a whining bark and darted past him and into the room.

The bedroom beyond was neatly laid out and filled with an even heavier layer of dust than the rest of the house. It was empty, and there was no sign that animals or birds had invaded it. He held up the lamp, looking around.

The bed was neatly made up, with a faded, dusty coverlet over it. A single rose lay in the center of it, dried and brown with age. A pair of men’s boots stood at attention near the foot, mud from a years-past jaunt still crusted in the seams. A fringed leather coat, similar to the one he wore himself and about the same size, hung on the back of the chair at a writing desk. Jesse stood in the doorway, looking around.

His eyes fell on the peeling silvered back of a mirror, turned on its hanging wire to face the wall. His breath left his body in a rush, and the air inside the room moved across his skin in a soft, icy breeze. This room’s been closed since before the Klughs even moved out. Someone died in here long ago. “Hey...dog...c’mon,” he said, softly, clicking his tongue. He looked around. The dog was not in the room, and as his confused, baffled gaze darted around in disbelief, his eyes fell on the a clay bowl down on the floor, filled with the petrified remains of jerky and bread. He stepped towards it and bent to read the inscription etched into the clay. Steuben.

I shouldn’t be in here. He’d started to shake, and as he backed from the room he could hear, as if from far away, the faint sound of a dog barking with joy and a young man laughing.

Giving the room one final look, he realized with a sense of absolute certainty that he was alone. "Bye, Steuben," he whispered. He firmly pushed the door all the way open, then headed briskly back down the stairs.

gah. I hate scary stuff. but at least this was sweet-terrifying, not horror.

Loved it. Not scary at all. just a good suspense tale. Well done as always. -Amy

I'll agree. Just spooky enough that I was glad I didn't read it before bed!! :-)

Glad you all liked it. :-) I really kind of wish I could have spent more time on this story, because I think it would have been a lot of fun to write. Alas, right now, I don't have that luxury. Spending three posts on it was extravagant. I might consider fleshing it out for when we compile the anthology (that will happen after book two hits the market and while I'm finishing up book three)

As far as scary stories go, I kind of prefer the low key creepy stuff to full on horror. It's the spooky stuff that goes on in my own head that get me, the little details you might not even notice. Maybe it's from growing up in the South, where I suspect we're outnumbered by ghosts and there's poignant, bittersweet history everywhere you turn.