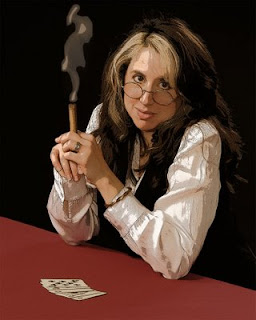 As you can see, I've got a profile pic over there that features me playing a round of "poker" while puffing on a big, fat stogie.

My friend Bill came out here and shot a ton of pics of me for this blog. Just cuz. He correctly observed that I was dressed in clothing from the wrong period in the original picture. So he shot a bunch of very fun "Western theme" shots for me, which I will probably be posting here and there. It was a fun day.

I have to tell you about the cigar. Call it a cautionary tale, if you will. Or just laugh at me. Everyone else did.

Unlike some of the boys in the story here, I don't smoke. And I especially don't smoke cigars (I'm talking to you, Saint). Bill suggested we run up to the Wal Mart and pick up a cheap cigar for a prop. So, off went Marie (Bill's wife), my three year old daughter, and myself.

The clerk was all like "you're doing what with it?" She was amused that we asked for the cheapest, fattest smokes she had on hand. We ended up getting short blunts, at the bargain price of five for three bucks. That's economy, right there, folks.

So, not wanting to look like amateurs by having me puffing on a neatly cut, unsmoked stogie, I went outside to light the thing and puff it down a bit. I am the absolute, no contest, most incompentent smoker on the face of God's Green Earth. It was kind of windy out, the thing kept going out because I wasn't puffing it hard enough, the smoke was making my eyes water, the works. I had to really give it a couple really good pulls to get it going.

Let me state for the record, I was a Theater and Speech minor. I have had to puff a few smokes on stage before. Not a big deal. However, cigarettes are not cigars. This sucker was filling my mouth and throat with a horrible, cheap-ass, foul-smelling cloud of toxins that would probably kill the lawn if I exhaled it close enough to the ground. Oh, dear Lord it was bad. I started retching. I cannot believe anyone would ever do that more than once.

I'm on my hands and knees, eyes watering, gagging, and holding a burning cigar in my hand when I hear my three year old step up to me and say to Marie "Why is Mommy sick?" And then I thought to myself "Oh, NO! My child is seeing me smoke! I'm a terrible example!"

Then I had another thought: "No, she's not seeing me smoke. She's seeing me dry heave into the azalea bed while holding a smoke. I'm a GREAT example!"

But it's all cool. Marie told her I was sick from eating penguin poop.