I managed to update Ask Wash just now. The keyboard at my Mother in Law's house sucks so much I ended up having to use the voice function on my phone in tandem with Google Docs to crank out the update.

I will never leave town without my laptop again.
Posted by 'gina at 2:24 PM No comments:

family emergency ....updates as I can manage

Hi, all, sorry for the late and sloppy updates. I am out of town right now, helping out at my Mother In Law's house. My Father in Law passed away late last week and we are tag teaming taking care of my husband's mom for the time being. The husband and kidlet have gone home for now and I am sort of holding down the fort here.

So if I'm slow to respond to anything, that's why. Please be patient with me.
Posted by 'gina at 6:25 PM No comments:

Howdy, all. Just a heads up to let you know that for the time being, I'll be updating on Fridays instead of Thursdays. (It's kind of ironic and funny to me that the Thursday Post used to be the Thursday Night Just Around Midnight Post for the sole reason of me wanting it up bright and early Friday morning. It slowly morphed into the Random Hour On Thursday Post that you are familiar with now. )

However, my schedule for the week has changed, putting me at music practice and/or playing in a pub on Tuesdays instead of Fridays. Tuesday was my day to have the first draft of the week's post at least thrown together so it could be worked on until Thursday. Because I'm tied up working on other things on Mondays as well, that is going to push my schedule forward one day so I am now going to aim at posting on Friday. Which I guess is okay, seeing as how that was my original plan anyways.

Ask Wash will remain on his current schedule of a Monday post.

See you on Friday!

Still kind of working out how to go about doing the "Ask Wash" column. The current plan is to update on Mondays, if he has questions to answer. It's updated today, by the way.

I may start building separate entries for individual questions, but for now, it's all on one big page under the "Ask Wash" picture to the right.

Have a good week! See you Thursday!

Nothing new today, just thought I'd post this pic of Jesse 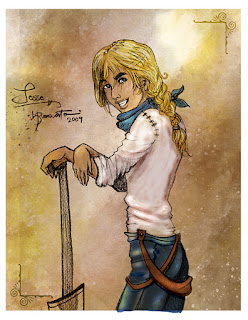 I'm tidying up some stuff on here and doing some other things and figured I may has well post that colorized pic of Jesse while I was at it.

I'm trying to figure out why and how this new Facebook format thing is better than the old one. It kind of sucks. But evidently I don't have much choice here if I want a Facebook presence.

Maybe I just didn't get enought sleep last night/enough coffee/all of the above.

I have another piece of fan art on the way that was sent as what is my most favorite Christmas present, but I have to scan it and set it up. So watch this space.