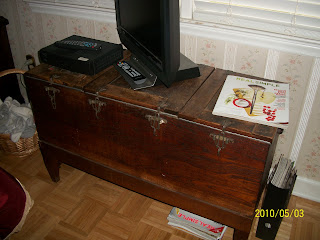 Here it is: the contraption the girls use to keep the food hot in the kitchen. It is called an "Aladdin Stove" and also the "Atkinson Cooker." It has been in my family longer than I have. I actually used to think it was for just keeping food hot, but then I did a little research on it and discovered that you could actually cook with the thing. It is basically a slow cooker. You put hot stones inside it, put your pots on top of them, pack some insulation in there, and several hours later you got some hot, cooked food coming out of here. When you consider how low tech this thing is, that's pretty awesome.
I'll be perfectly honest here...I do not know exactly when the thing was invented and patented. So it might be period to the story or not, I can't exactly say. Usually, I am pretty religious about trying to make sure everything is period for the time, but c'mon, look at the thing. They woulda used one if they woulda had one. Plus, the natives cooked by dropping hot stones into a skin bag with their food in it, I don't think this thing is too much of a stretch. Humor me.

My mom has the stones around the house somewhere, I just couldn't find them. They look like flat stone discs the width of large serving plates and a couple inches thick, made of what looks like some fine-grained gray soapstone. If I can find them, I will post them.

I left the stuff on it to give you a sense of scale. Also, I didn't want to mess around with my mom's tv. 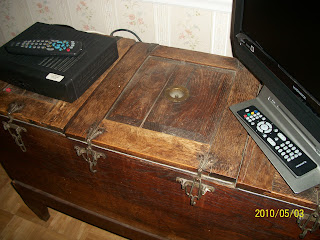 Here in this second picture, you can see a little vent hole in the top of the middle panel. The way I understand it, this hole allowed food to brown better. Slow cooking does not brown food, and evidently this stove is no different. However, someone along the way go the idea that letting out a little steam would help brown the food. There is supposed to be a lid for the vent that is missing here and that I have never seen.
Also, you can see the latches that hold the lid down. They give a little snap when you open and close them, putting pressure on the lids to hold them down tightly. 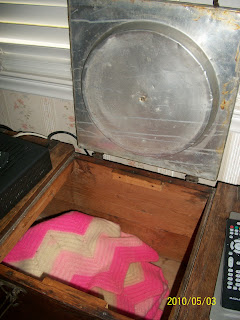 In this third picture, you can see what my mom uses the stove for these days. She stores linens in it, which is a great way to utilize a large, clunky antique rather than letting it moulder in some storage building somewhere, with dirt daubers making nests all over it.

Anyways, you can see the tin lining still in the lid. It is missing out of the rest of the stove for some reason, and I personally have never seen this thing with the full lining in it. I am not sure of why the lids have those large, circular protrusions on them. I am gonna guess that maybe they fit down snugly on top of the pots when they were inside. That one there in the picture you can see has a piercing where the vent is. The other two to either side are not vented like this.

Here the thing is at least a hundred or more years after it was made and still solid enough to have a second life as a sturdy trunk and tv stand (I find that ironic...this thing being used to hold up a flat screen tv. I bet it could tell some tales.) I challenge you to find a piece of modern anything built this well. Put it this way...I would not want to drop it on my toe.
Posted by 'gina at 1:37 PM 5 comments:

Write Chapter 11 Contest In The Works

It has come to my attention that I am not very good at numbering my chapters. In fact, I suck at it.

So much so that I am sure most of you know by now that there is no Chapter 11.

A friend suggested I write the scene where Luis booby traps the crapper over at the Yarl's place, but I think we've come up with something a little less predictable: have one of you talented and creative readers write it.

The contest will start when I think of a suitable prize. I have a few ideas, but if you have any, I would love to hear them.

Here is the criteria Jim and I came up with. Again, suggestions welcome:

1. It does not have to be the scene with the outhouse unless you want it to be. It can be anything taking place before or during chapter twelve.

2. It does not have to be any of the established characters here, but it can be.

3. It must take place at any location between Salt Lake House and Three Crossings (Green River Station being between those).

5. Please keep it "PG 13" enough that I can post it on this site without an adult content warning. I have no problem with adult content stories, or even adult fanfic about my characters, but I do not wish to have to go to a mature content label for this site. So keep that in mind if you want to see it posted here.

6. It should only be one chapter long (it is, after all, the lost Chapter 11.). However, there is no rule on how long or short that chapter has to be.

The winner will be reader's choice. I will put up a poll and we can all vote.

Contest has not started yet, so please don't send anything in quite yet. Let me iron out the details first. But at least you can be thinking about it, if you are interested in participating.

See you Friday (or, for those of you who have figured out I usually post last Thursday sometime so it will be up bright and early on Friday, see you in the wee hours Thursday night.)!
Posted by 'gina at 10:55 AM 4 comments: