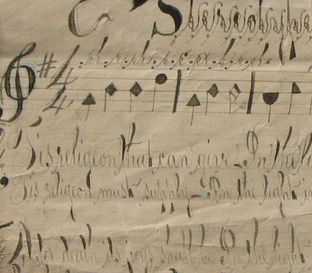 Couple of folks have asked about Jesse singing Sacred Harp songs in the cave, wanting to know what that meant.  Sacred Harp music, a type of "shape note" singing, was and is a distinctly Southern kind of
a cappella group singing. It was not done for performance in front of an audience, but instead was done for the sheer joy of of it.

Have a look at some of these links, they show some good examples of what the "sings" that Lily dragged her reluctant brother to might have sounded like, and what type of songs might have been sung.

This last one is a trailer for an indie film that I must see. Like now. I didn't know about this, I stumbled on it looking for good links on You Tube. Time to check and see if it's on Roku. You can actually see glimpses of the "shape note" music sheets used in the singing on this trailer.

"Awake, My Soul: The Story of the Sacred Harp" Movie Trailer

In case you're wondering, Jesse is a baritone. There's no baritone section in Sacred Harp, so he'd probably sing with the tenors.  In the scene in chapter 141, where he's singing "fa so la" is probably how he'd warm up and practice his pitch.
Posted by 'gina at 10:33 PM 6 comments: