Holiday Schedule for the Home Stretch 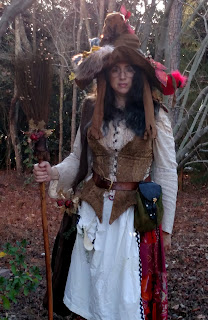 So, we're in the home stretch of this thing, both for the year and for the Five Dollar Mail series. Been a crazy busy holiday season so far for us (we're catching up on a lot of lost time!). I thought I'd be ready to post tonight, but the truth is I am just not. This is the last bit of our story, and I don't want to rush it, so I'm just going to allow myself to run on a holiday schedule for the next week or so. I may having something up this weekend, but I'm not sure how that's gonna go yet, but I fully intend to have something up for next week.

I don't want to just bang something out at this point and post it hastily. This is the final bit, you know? While I am really ready to be done and move on to other projects, a large part of me isn't quite ready to let it go yet.

I got called in last week to reprise my "La Befana" thing at the kid's school I can't tell you how much I love doing this. I read Old Befana to them (the linked version of this story is so beautiful). Handed out some candy, dispensed some hugs, and talked about Italian Christmas traditions. The main thing the children seem to love the most, though, is the hat. I don't know if you can tell, but it's covered with bird and animal puppets, including a cardinal that sings and a nest full of baby birds. I always have to stoop down so they can make the bird sing and the babies wiggle.

And yes, before you ask, I dug Radagast the Brown. A lot. I actually considered adding some birdshit to my kit.

That broom you see there was made by none other than Bill Frazer, who is married to my editor Marie and who took the pic of me on the back of the book covers. I just added the Christmas bling to it.

Anyways, I'll see you before Christmas, so until then, enjoy this season of peace and be safe.
Posted by 'gina at 5:09 PM No comments: