I just came back from Pennsic War in western Pennsylvania this past Sunday. Pennsic War is the Society for Creative Anachronism's biggest event of the year. I was there for a week.

It was the hottest Pennsic anyone can remember. It's a sad state of affairs when you go to western PA and it's actually hotter there than it is is South Carolina. I felt pretty damn cheated.


Anyways, although the historical focus of the event is pre-Renaissance, there are all kind of merchants at this thing, and a bit of crossover in time periods with the buckskinners and Civil War folks. So I went to Smoke and Fire, one of the sutlers there, and bought a tinder kit. This is how people used to start fires before Bic lighters and strike-anywhere matches were invented. The choice of matches at the time were either extremely stinky or hideously dangerous. So if you could manage to get a light going without one, good for you. 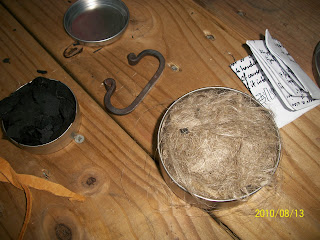 Our tinder kit was one of a couple ways to go about getting a fire started. You see here, from left to right, a tin of char cloth, a striking steel, a tin of jute fiber, and the directions, which incidentally proved to be fairly useless. I say this because in the following hour or so after this picture was taken, about a dozen people (who are, I should mention, all from an SCA household known for accidentally setting themselves, each other, and inanimate objects on fire) tried and failed to start a fire with this thing. The flint is not pictured because someone was holding it and I didn't realize it wasn't in the shot at the time. 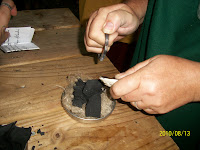 Here is Robin taking a turn at it. She's got the flint and steel in her hands. The object is to strike the flint with the steel so that sparks land on the charcloth (which is cotton fabric burnt in an anaerobic environment, such as a sealed tin). The spark is then folded into the jute tinder and blown on till it combusts. The directions say this can be done in ten seconds or so.

You know what? My entire ass. 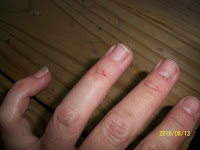 See the cut on my knuckle there? We all had a variation of that same cut on our hands when we were through. Not only do we totally suck at starting fires when we mean to, but we also evidently lack the ability to learn from other people's mistakes. So like lemmings, each and every one of us messed around with this thing till we got hurt.

But hey, now we know firsthand why flint made such a good thing to kill things with. 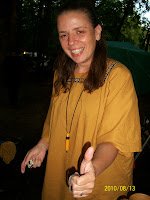 Pam did not get a cut on her knuckle. She got one on her thumb.

Her husband David there in the green tunic cut his knuckles the way I did.

Saint most likely does not use one of these to light his smokes. Although if he did, his asthma would probably clear up. No, he probably uses a tinder tube, and I wish I had seen one of those while I was up at the sutler. 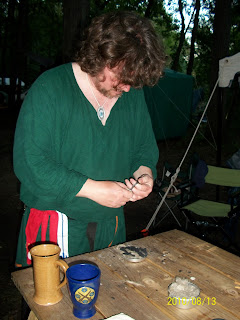 One of the guys insisted that since the humidity was hovering around eighty percent, and the air was so thick we were all slowly suffocating trying to breathe it, and because our camp is in an area of Pennsic known as "The Swamp", it was too damp and wet to make a fire this way. Yeah, dude. It must've been that. Otherwise, we would have totally started a bonfire. Probably within ten seconds, too. No doubt. No way it was our own pitiful incompetence. 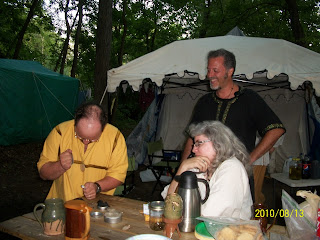 Here's Dave in the yellow tunic (yeah, we have two Davids.) failing while Becky and Manuel look on. Actually, Manuel was the only person in camp that evening that who didn't give this a shot. He probably noticed everyone else had bloody knuckles and took the hint. I should mention that Manuel is a pretty intelligent guy.

Becky got the best showers of sparks with the flint and steel. Plenty of sparks were falling onto the charcloth and tinder, but not a one of them caught long enough to do anything with. They just kept bouncing right off and going out. 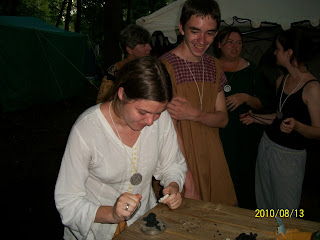 Gwen had a go at it, too. Her brother Drake is pretty amused by the whole thing, but he didn't save us all from ice and darkness, either.

Well, looking on the bright side, who knew a fifteen dollar bag of burnt rags, dried plant fiber, and a rock would provide a whole crowd of mostly sober people so much entertainment? Hell, I shoulda picked one of these suckers up for our last party.

Good thing one of the women in our group is a nurse. She quite literally had a suitcase full of bandaids in her tent.
Posted by 'gina at 7:42 PM 3 comments: