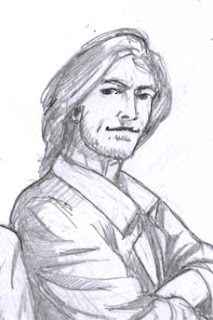 Diego is working on a new Bender. This particular picture is part of a larger piece that will end up being the cover of the printed book. I actually asked him to hold off on finishing it till I let you all have a look.

I compiled a small collection of your suggestions and sent them along for references.

We Three Loggerheads Be (Prequel)

“So, Hungerford.” Saint loaded the last sack of flour into the back of the wagon and mopped his brow with the back of his hand. The Autumn sky was a brilliant, impossible blue and while the crisp air warned of the chill to come, the sun was warm on his back. “Where you headed next?”

“Making my way up to Three Crossings.” Hellbender Hungerford, the farrier the company had hired on to service the relay stations, was dusting loose flour off his gloved hands. “May go as far as Fort Laramie, dunno yet exactly. Hoping that eventually, they’ll keep me in one place for a while.”

Saint nodded, straightening up and flexing his back. He raised an eyebrow and nodded towards the Silver Star. “I could go for a sarsaparilla about now.”

“Buggering fine idea, mate.” Hungerford fell into step beside him. “Gonna be a while before the chance comes up for one again, yeah?”

“‘Fraid so.” Ah, shit. He froze with one boot on the low step leading up to the porch of the saloon, the other in the dusty earthen street.  The day’s too nice for this.

Rob Yarl was stalking across the street towards them, his meaty, sunburned face fixed in an unpleasant scowl. Yarl had mixed it up with the crew before, and, in particular, had mixed it up with Saint. He saw the two of them standing on the stoop and his scowl deepened as he approached.

Saint exchanged a glance with Hungerford, then fixed his eyes back on Yarl.

“Heinrich Claus in there?” Yarl stopped at in front of the stoop and jerked his chin towards the saloon doors.

“Because I got something to say to that chickenshit German son of a bitch.” Yarl muttered, shoving  past. His big forearm impatiently glancing across Saint’s chest as he shouldered his way through the swinging doors.

The doors creaked, flapping in his wake like shutters banging on a house right before a tornado rips them off. What the...? Saint, mouth dropped open. “Let’s go.” He shrugged, starting for the doors.

Saint was surprised by the startled, wary look on Hungerford’s face. “Because Claus is in there,” he said, gesturing at the doorway. “I saw him go in while we were loading. And Yarl likes to pick fights with immigrants...and with pretty much everyone.”

The mere sight of either of the Yarl brothers was enough to put Saint in a fighting mood. They had caused enough trouble for the crew, the Old Man, and for Saint himself that his patience for them was at absolute zero. Anyone else doing the exact thing Yarl had just done would probably have gotten a scowl and shrug. At the very most, a hard shove in return. But the very fact that it had been Rob Yarl, and him on his way to rough up yet another person who happened to have a heavy accent, made his vision go hot and red.

Hungerford was shaking his head. “Leave it, mate.”

“I mean don’t go in there. Don’t get in the middle of that.”

Saint’s mouth dropped open, fresh anger flaring through him. What the hell, Hungerford? It’s not our problem so let it happen in front of us? “I can’t believe what I’m hearing, you just expect me stand down while Henry Claus gets a beating from someone like Yarl?”

Hungerford mopped his face with his hand, clearly at war with himself. He shook his head, looking like he was having a conversation in his head Saint wasn’t privy to. “Mate...I know what you’re thinkin’, and I don’t blame you. But...”

“If you knew what I was thinkin’, you’d have taken a swing at me already.” Saint spat, disgusted. “I didn’t have you pegged for a coward, grow some balls!”

Hungerford exhaled through pursed lips, raising his eyebrows. He chose his words carefully, evenly. “I can’t talk to you about this now, mate. You’re gonna have to trust me on this one, yeah?”

“I got no reason to trust you. You’re makin’ a call I can’t stand by.”

“And you’re bent on ending up on the wrong buggering side of a bad cock up.”

Saint felt downright betrayed. He’d liked the quirkly stocktender well enough, but now, hearing his flat refusal to go to Claus’ aid against Yarl , his regard and respect for the man was quickly evaporating. Claus owned the best restaurant in over a hundred miles, and didn’t seem to mind when the crew...any of the crew...decided to eat there. There was no way he was going to stand here and let Yarl go into the Silver Star and throw the man around.

“I am. Yeah.” The farrier nodded, stepping between Saint and the saloon doors, blocking his path. “Come on, mate...” he said firmly, nodding back at the wagon, his eyes straying briefly over to the homey little house that housed Abigail’s at the other end of the street. “Why don’t we go down to...”

Saint’s temper boiled over and he planted a hand in the center of Hungerford’s chest, giving him a rough shove as he tried to pass. “Well, I ain’t.”

The farrier’s hand shot out, grasping Saint’s forearm and jerking him back with surprising strength.

Enough. We got to put up with enough shit from some of these jackasses in town, I sure as hell ain’t puttin’ up with more of it from our own people. Saint spun around, launching himself into Hungerford, shoving him back into the porch rails. Hungerford brought up a knee as he fell backwards, jamming it hard into Saint’s ribcage and throwing him off.

Saint’s shoulder slammed into the rough timber of the stair riser, and he rolled, gasping in pain as Hungerford shoved himself free of the porchrail and slammed a fist into his jaw.  His head hammered back into the hard packed dirt of the street. Light and dark shuttered across his vision and he grabbed Hungerford’s shoulder, torquing him sideways and throwing him off balance before driving a hard elbow into the side of his head. Hungerford went down with a satisfying grunt.

Saint rolled to his knees, his head throbbing and his shoulder and rib cage sending fireworks of pain through him. He tasted blood and didn’t know if it was from his nose or his lip. Son of a...

Hungerford’s boot caught him in the kidney, just over his hip, toppling him into the dirt again. He writhed, his midsection convulsing, and rolled over, Hungerford all over him. Gonna be pissing blood after this. He jammed a fist into the farrier’s solar plexus, hearing him cry out through the ringing in his own ears. Hungerford doubled over, unable to breathe, and Saint grabbed him by the shoulders and threw him hard into the porch riser.

He drew up a leg, trying to pull himself to his knees, but only succeeded in rolling backwards and lying flat in the dusty street, his head throbbing and his body seemingly full of broken dishware, burning coals, and bags of angry badgers. He opened his mouth to swear at Hungerford and managed a faint groan before abandoning the project.

He detected a shadow falling over him, the light through his eyelids dimming. He peered through them, squinting up at Deputy Blackie Shannon, standing over him with his arms crossed. He groaned again, his eyelids dropping back down over his eyes. The ringing and buzzing in his ears was loud, and he could barely hear Blackie’s disgusted voice above the din. “You stupid sons of bitches” was the last thing he heard before everything went quiet and dark.