Back When It Cost Five Dollars to Mail Supthin' Important

The proof copy of Book 2 came back and is ready for me to work on, and with it being Thanksgiving tomorrow (and my awesome family converging on me and my very awesome sunroom), I'm gonna do sort of an "antique post" (remember those?) this week. I have been taking some pictures when and where I can for this very occasion. 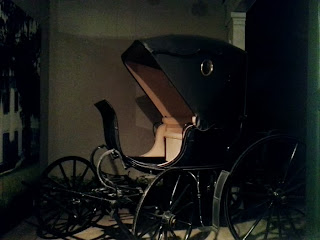 I've spent quite a bit of time in the South Carolina State Museum. South Carolina has had a pretty cool history, so the museum's got some nifty stuff in it. And while it's not "American West" type stuff, it's still stuff that would have been around and in use pretty much anywhere. For instance, I rounded a corner and found myself starting delightedly at Doc Plunkett's "Doctor's Carriage", exactly how it looked in my mind the rainy night when Rosie rode with him back out to the Green River station. 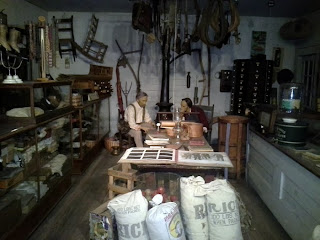 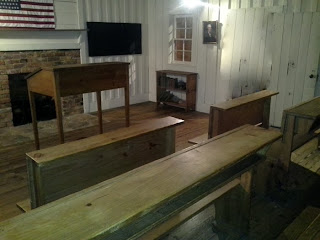 SC State Museum has some very cool life-sized dioramas. I absolutely love the old mercantile. I can practically hear Mr. Thomasin yelling at Rob Yarl in here. All that's missing are the plate glass windows Fiona loves so much. I like to imagine they make up the fourth wall.


I know I shot some nice pics of the classroom when I was up in Brattonsville and posted them some time back, and while I love that classroom, it's just not rustic enough. This scene is exactly what I am picturing when I am imagining Rosie's schoolroom. The desks are very plain, and the desktops are attached to the seats in front of them. They're missing the cutout hole for the inkwell I see in my mind...but other than that, this is pretty much it. 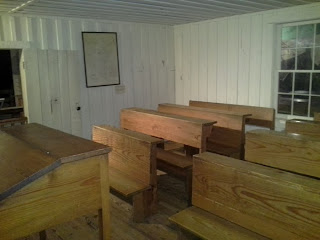 You can see it a little more clearly here. This is how Rosie knows when Jeb leans forward on his elbows in a attempt to sneak her braids into the inkwell. His weight on his desktop transfers to the back of her seat. 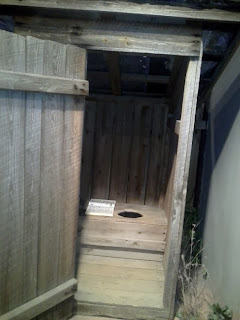 Lookie what I found out behind the schoolhouse.

For those of you who have never seen an outhouse, here one is in all it's glory. Having grown up in a very rural part of South Carolina, and having a great grandparents who were poor country farmers who raised ten kids in a bungalow they built themselves, I've actually seen one of these beauties as a functioning piece of country life as opposed to a replica built by a scenic crew. It looked more or less like this, only it was far more weathered. There was eventually a toilet in the house, but my great grandfather evidently thought that was far too prissy and used the outdoor crapper till the day he died. Or maybe he just liked the solitude of it. He did have ten kids, after all.

Anyways, snakes really do like to hang out in such places, and you can see where a few well-placed scores on the underside of the wooden seat with a hacksaw could make it give way under the weight of, say, Levi Yarl. 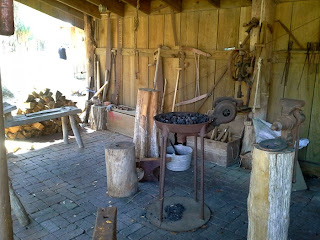 Okay, these weren't taken at SC State Museum. They were taken at Fort McAllister in Georgia. If you ever find yourself in Bryan County, you should really try to visit there. It's a earthen fort, so it basically looks like a bunch of hobbit holes. This fort was so hard to capture that after the Union army shelled it for days using some of the biggest guns the Union had, the only thing they managed to accomplish was to blow up Tom, the fort's cat.

I'm sure that probably pissed off the Confederate dudes stationed there, so at least it wasn't a total loss. I guess. They at least managed to upset some rebel boys. Can you imagine having to go back and tell your commanding officer that you blew that much ordinance, and all you'd manage to do was kill a poor little kitty cat? The fort was eventually taken, but not on that day and not without a spectacular fight. You should google it and read up. Some great stories about this fort. I am absolutely in love with Fort McAllister. 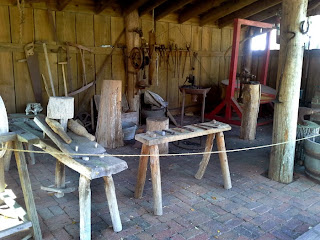 Anyways, enough about the cat and the fort. This is what a Civil War-era smithy looked like. Seeing as how this was in a military fort, this is probably what the smithy in Fort Bridger (which was, I am sure, nowhere near as cool as Fort McAllister) would look like. It might not be set in the American West, but hey, this was the technology of the time, and people needed horses shod and firearms repaired no matter where they were.


I'll be working on the final proof of the second book for the next week or two, so I may opt to put the story on hold for a week or two till I finish that. I don't know, it's going to depend on how my workload pans out. I find it very hard to write while I am reading, and when I try to force it, I find my writing really suffers in quality. So I'll do what I can.

In the meantime, have a Happy Thanksgiving holiday, however you spend it!