I am taking a week off from writing, because I am working on editing a never-published novella that is going into Riders and Kickers. My husband Jim has written an entire novella that centers around Tommy, and I'm going doing the re-write on it before we send it to Marie, my editor. When I get into heavy edit mode, it's hard to write, so I just decided to focus solely on editing this week. The novella a fun adventure tale, and I know you will all like it as much as I do. Finally, Tommy will get some airtime.

So, instead I made a couple "tintypes" of Still Water Woman and Jesse. Love making these. I am very happy with how Still Water Woman came out. I used a picture of the Yankton Lakota musician and activist, Zitkala-Ša. I chose her as a model because she's got such beautiful strength in her face. So I gave her a haircut and the hint of a traditional plains dress, and then sandwiched it with a picture of an old tintype, and then added some texture taken from an daguerreotype.

﻿ Jesse I did the same way, although unfortunately, I don't know the model's name. Not sure I like it as well, so I might do another one at some point. I do, however, love the tarnished and discolored tin in this one. The more tore up these things are, the better I like them.

Which is ironic when you consider that back in the Bad  Old Days, when I worked in a darkroom, one of the things I did was take old photos that actually did look like this and restore them. Which was a bit of a trick, because back then, nobody had Photoshop or even digital images. Had to use what I called Stupid Darkroom Tricks, photo bleach, and a thin, black or brown ink called SpotTone. I was very, very good at it. So I kind of enjoy the irony that I am now deliberately destroying perfectly good photos by Photoshopping damage onto them.

Anyways, hope you are enjoying these as much as I am enjoying making them. The regular posting will be back on next Thursday. See you then! 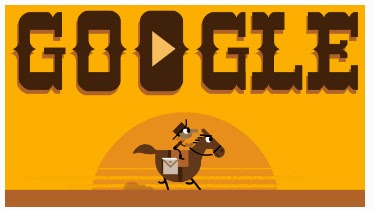 Today is the 155th birthday of the Pony Express, and as I'm sure most of you have seen, Google has made a Google Doodle to commemorate this day in history!

I guess it goes without saying that I am a huge fan of the Pony Express, so you know how excited I am to see this as a Doodle. They even made it into an cool little game where you guide the little Pony Express guy through an obstacle course to pick up letters and keep moving east, presumably to eventually make it to the last stop on the route, Saint Joseph, Missouri. ﻿﻿
﻿﻿﻿﻿﻿﻿﻿

I named my rider Luis. Luis didn't appreciate being pitched face first into cactus. I kind of suck at playing the game. So I never really made it to Saint Jo.

Anyways, this is a really awesome video about both the history of the Pony Express and the making of the Doodle. If you haven't seen it, you can view it here: https://www.google.com/doodles/155th-anniversary-of-the-pony-express