Today as Gina is temporarily out of commission with a weird back pain. We think it's Coccydynia. She's gone to see a doctor, who referred her to an ultrasound exam, but right in the middle of the ultrasound exam, the durn machine broke, so she has to go back again today to see if they can figure out what is wrong with her. On the sage advice of some good friends, she's been taking Motrin, which has releived the pain a great deal. (Thank you C!)

In the meantime, Gina hasn't been able to sit too much because the angle tends to cause pressure on her tailbone, so she's been more or less reclining on a hard futon mattress, which tends to relieve a lot of the pain. While stuck in that position, we've been watching one of our new favorite shows on Hulu, Alias Smith and Jones. 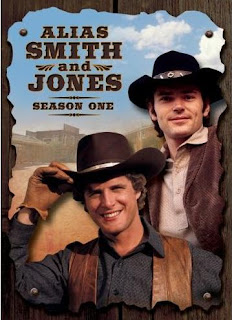 For those of you not familiar with this vintage 1973 western, I would quickly describe it as Butch Cassiday and the Sundance Kid meets The Fugitive. Wikipedia describes thusly...

Operating primarily in Wyoming Territory, Hannibal Heyes (played by Pete Duel) and Jedediah 'Kid' Curry (Ben Murphy) are the two most successful outlaws in the history of the west. However, the west is starting to catch up with the modern world: safes are becoming harder to crack, trains more difficult to stop, and posses more skilled at tracking them down.

Heyes, the leader of the Devil's Hole Gang, falls out with the other members and he and Curry decide to get one thing: "out of this business!" Since they have never killed anyone, they qualify for pardons. Through an old acquaintance, Sheriff Lom Trevors, they manage to contact the territorial governor. He agrees to grant them amnesty, but cannot do so openly without angering the public. He therefore makes a deal with them: if they can stay out of trouble for a considerable but unspecified period of time ("until the governor feels we deserve it") and not tell anyone about their arrangement, they will be cleared of all charges. Until then, they will still be wanted. The two are skeptical and ask, "That's a good deal?"

Heyes's and Curry's skepticism proves very well justified indeed; the straight and narrow path is not easily traveled. Heyes and Curry (now calling themselves Joshua Smith and Thaddeus Jones) often find themselves tangling with lawmen, bounty hunters and operatives of the Bannerman Detective Agency (a satire of the Pinkerton National Detective Agency), not to mention other outlaws. To get out of these sticky situations, they are forced to rely on Heyes's silver tongue, Curry's fast draw, and occasionally a little help from their friends from both sides of the law.

It's a fun show, but as much as she enjoys it, she would rather be here, working on her story, so hopefully she'll be back in the saddle as it were next week.

Have a great weekend!

It has come to my attention that a number of you do not visualize our favorite farrier, Hellbender Hungerford, the same way I do. So I've been considering doing a new picture for him to reflect how you all see him.

Which is interesting, because out of all the characters I had to describe to artists, he was probably the hardest for me to put together. I mean, I see him in my head clear as day. Conveying him to someone else is evidently a bit more tricky.

We're wanting to do a hardcopy version of the first hundred chapters, and I'd like to perhaps consider re-creating Bender's picture a bit for that.

So if this were a movie or television show, who would you cast to play Bender? Feel free to leave comments in the comments section so I can see what's inside your heads. If enough of you like him the way he is, I'll leave him alone. Otherwise, we'll see about maybe changing him up a bit.