And The Number of the Counting Shall Be Three 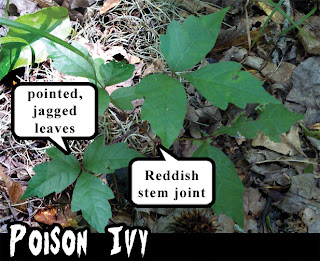 I wrote this article for the monthly newsletter of my local Society for Creative Anachronism.

The article of general interest to anyone who camps, and I frequently get requests for it, so I thought I'd host it here where it might be a little more accessible and easy to find.


It’s the time of year when we’re spending a lot of time outdoors in this gorgeous weather, at events, during mundane activities, and even in our own backyards. There’s a lot of things out there in the bushes we need to watch out for, and I hear a lot of misinformation circulating around.

Even about the bushes themselves.

I’m talking about the bane of my existence, the one thing I fear more than ticks, mosquitoes, fire ants, bears, or storms. Yes, folks, I’m talking about Poison Oak, Poison Ivy, and Poison Sumac.  It’s a cliché, but it’s true: “Leaflets three, let it be.”

We’ll start out by talking about a few common common lines of thought about the subject, some true and some not. 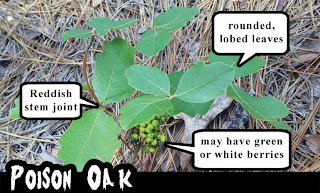 False...provided you’ve showered since exposure:  Don’t scratch the rash, you’ll spread it.
Truth: Usually, the rash comes up on your skin a few days to a week after you’ve been exposed. If you’ve showered since then, the urushiol (the oil that causes the rash) will have washed away. The “spreading” effect that has spawned this idea is due to the fact that the rash comes up on skin at different rates. The liquid inside the blisters does not cause a reaction. However, don’t scratch hard or break the blisters, as doing so leaves you open to infection. 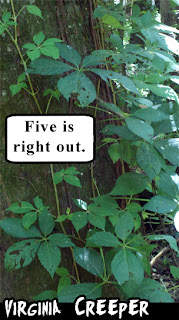 Truth: Again, the rashes are not contagious. They don’t spread the rash on you, and they won’t spread it onto other people. Now, what you cando is get exposed to the plant, get the urushiol on you, and then go up and shake hands with someone or hug them. If the urushiol gets on them, they can get a rash, even if they were indoors all day. At that point, it’s like the flu in that you can get it from a doorknob. I’m talking directly to you, people who love to say “Oh, it’s cool, I’m immune to the stuff.” Please be aware that many people are not so lucky and wash up if you’ve been exposed, unless you like the idea of being a misery vector.

Blackberry is another look alike, only it has thorns. Poison ivy never has thorns. But often it does grow where wild blackberry grows. It’s sneaky like that. Still, it’s like identifying snakes....if you aren’t sure what you’re dealing with, assume it could potentially hurt you and avoid it.

As for Box Elder...to my eye, it just looks so much like Poison Ivy I can't tell where the tree stops and the Poison Ivy vine that's frequently growing on it starts. It happens, and it's a cruel prank as far as I'm concerned.

Usually False: I got exposed once, and I didn’t get a rash, so I must be immune.
Truth: You probably won’t the first time get exposed. It’s that next time that you have to worry about. The rash is an immune response. And it’s an unusual one in that it tends to be delayed in most people (hence the long lag in time between exposure and the manifestation of the rash). You might think you’re immune, but every time you get exposed, you risk that being the time you end up finding out how much fun steroid shots aren’t.

False. And possibly criminally negligent: I’ll just burn it out.
Truth: Smoke from this sort of plant could literally kill you or someone else. It can go straight into the lungs, cause a respiratory reaction, and cause you or someone else to asphyxiate. Best way I’ve found to get rid of it is to spray it with Roundup Heavy Brush Killer and wait a week or two. Chopping it out just encourages it and fills it with spite. So poison it, wait till it dies, then very carefully remove the dead plant and bury it. Be aware it can still get revenge even when dead. Which brings us to....

False: It’s winter. I don’t have to worry about it now.
Truth: Oh, yes, my friends. Yes, you do. And it’s even worse in the winter because it’s harder to identify it. Look for vines with reddish, hairy looking bark and little woody shoots that stick straight up and have a little bends near the top. Maybe there will be the remnants of tiny white berries on the stems. Sometimes you can find the dead leaves in the surrounding leaf litter. It can still get you even dead. It’s like the mummy or Nosferatu. Only nastier.

Poison Ivy and Oak prefer disturbed areas, but they can and do grow just about anywhere. I’ve seen them in all sorts of environments, particularly the types of places we like to have events. I’ve seen them in parks and even at Riverbanks Zoo hiding in a planted bed. 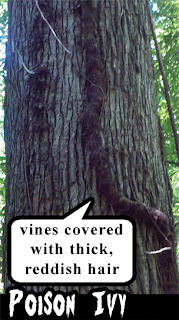 Poison Ivy: This plant matures into a vine and covers trees, fences, anything it can get around. The sets of three leaves are pointed, satiny to shiny, with a jagged margin. The stem on the middle leaf of the trio is often a little longer than the other two. It grows into a vine that when mature, is covered with reddish, hairy fibers that look like they might be fun to touch. They aren’t.

Poison Oak: Same three leaf rule, but the leaves are rounder and the lobes irregular and random. Again, satiny leaves. This plant matures into a gawky-looking shrub that can reach about ten feet, but usually it stays in the two to four foot tall stage in my experience. It gets small green berries that turn white.
Both plants are beautiful in the fall, turning bright shades of yellow and red.

Poison Sumac: Thankfully, fairly rare. It grows in wetlands and is far less common. Which is good, because it’s brutal. The one time I got tangled up with sumac, it sent me to the ER. It can grow into a good sized tree, and has long, compound leaves of seven to thirteen leaves. It looks nothing like Oak or Ivy. I haven’t seen one since (I was at an SCA event in Georgia, actually.), so I haven’t taken any pics of sumac. It would probably behoove you to at least have a passing familiarity with it. You aren’t likely to encounter
one, but if you do, you could really get messed up. 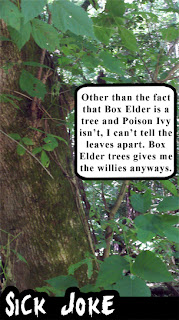 Learn to identify these. I would almost say avoid Google Images, because I have seen all kinds of crazy things identified as Poison Ivy that isn’t. However, if you do use Google Images, just make sure your sources are reputable. Cross reference heavily. In any case, I’d rather you be wrongly afraid of Virginia Creeper or Sassafras or Box Elder and be safe than not be aware of anything and end up in misery. So if you err, err on the side of caution.

If you are exposed to it, or think you may have been, simply rinse your skin off in cold water (this is important. Use cold water first to avoid opening up your pores.). A splash in a creek or stream will do fine, even a careful rinse-off out of a canteen will help. I carry bottled water in my van at all times for this very reason. You have a very short grace period once you’ve been exposed (I'd call an hour seriously pushing it. Anything less, your mileage may vary.), but it’s not that hard to get it off your skin.

If you know you’re going to be exposed beforehand, applying Ivy Block to your skin creates a barrier to keep the urushiol off, buying you a little time to clean up before your immune system kicks in and goes crazy. There is also a product called Technu which can be used to help get the urushiol off after exposure. I’ve used both, and I recommend both, but in all honesty, plain cold water will work if that’s all you have. Be aware of urushiol contaminating your clothing, too, and act accordingly. I recommend undressing right there in front of your washing machine and not contaminating your living areas. Rinse off with cold water, and then...and ONLY then, take a hot shower. Under no circumstances should you take a bath. A bath will redistribute any urushiol left on your skin and coat you in something you really don’t want to be coated in.

These things might sound extreme. However, I’m the most allergic person I know to this stuff, I spend a lot of time in the woods, and I rarely get into this kind of trouble. That’s because I am paranoid and I treat urushiol as if it were radioactive kryptonite. Because for me, it is. It is possible to have an anaphylactic response to this stuff. Not only that, but wallowing obliviously in the stuff during your first week of Pennsic can really ruin your will to live the second week. You don’t want ivy rash at War. You don’t want it ever. Pay attention, learn a little woodlore, play safe!